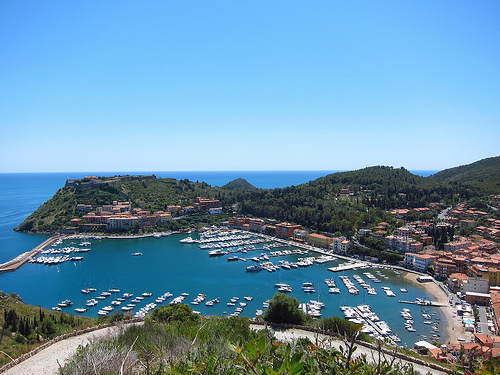 Porto Ercole is a village in the municipality of Monte Argentario, in the Province of Grosseto. It can be reached in about twenty-five minutes from our hotel and Porto Santo Stefano, is one of the two major towns that form the joint. The resort is located on the eastern side of the promontory of Argentario, a little more than 40 km south-east of Grosseto, about 7 km south-west of Orbetello and about 12 km from Porto Santo Stefano.

On July 18, 1610 he died in Porto Ercole Michelangelo Merisi, known as Caravaggio. As far as we chronicle in Rome on the evening of May 28 in the year 1606 in Campo Marzio, a game of ball in the game ended in a brawl, during which Caravaggio killed Ranuccio Tomassoni.
Caravaggio, who was sentenced to death, was forced to flee, thus beginning a frantic escape from justice, which lasted four years. From Rome he reached Naples and then Malta, where in 1607 touched the investiture Knight of the Order of Malta (and with it a secure impunity), but a new brawl led him straight in the prisons of La Valletta, from which, however, managed to escape to reach Sicily.
In the month of July in the year 1610 when the intercession of the powerful Colonna family, it seems that the request for clemency was going to be accepted. Caravaggio again took to the sea on board a felucca live in Porto Ercole, then the State of the Spanish Garrisons. The painter took with her bags up three valuable paintings (St. John the Baptist, St. John and Mary Magdalene lying in ecstasy) that were in effect a safe-conduct for salvation, he intended to donate to Cardinal Scipione Borghese, nephew of Pope Paul V, to thank him of the interest shown.
Coupling the landing of Palo (about forty miles from Rome) Caravaggio was probably mistaken for a criminal and arrested. The time required to clear the error and then obtain the release was too long to hope to find the felucca, which in the meantime had taken over the sea carrying the precious cargo.

Caravaggio tried to recover his paintings at a time Incamminandosi of Porto Ercole, where he arrived exhausted and unable to find the felucca. Could no longer continue his journey because of illness died in Porto Ercole July 18, 1610 at the age of thirty-nine.
According to a document, it would have died of the disease in the hospital of St. Mary Help of Christians, which would correspond with the actual deconsecrated church of Santa Croce.

The history of Porto Ercole began already in Etruscan times, as witnessed by the many artifacts found in nearby areas. As a result, the small Etruscan town was conquered by the Romans and turned into the harbor (one column of that era was found in the harbor). It is assumed that the bastion of Santa Barbara has been a beacon of Byzantium.

He is currently a tourist destination of choice. Places of historical and artistic interest are certainly the four strong, especially the Forte Stella, with its six-pointed star-shaped. Forte Stella is part of a complex defensive system, link in a chain of massive military that was owned by a Spanish bastion called State Of Deans.

In fact, entering in Porto Ercole for the first time, anyone can see that in a few seconds the whole country is protected perfectly by this military architecture dating back to the sixteenth century., which leads the imagination to past glories, or catastrophes, such as the Mediterranean Sea was infested by pirates in the Barbary raids in the country are recalled every year for one night in the early spring …

The “Night of the Pirates” is an event that takes place from 2007 to March or April, in which we form from pirates and you can participate with teams of ten people (“rabble”) to a treasure hunt. Country very present in the nightlife Orbetellana once a year for an entire night, Porto Ercole is transformed into a veritable den of pirates, complete with a treasure hunt.

Streets, places, beaches, every corner of the port becomes an alley where you can make unpleasant encounters or an inn where it is no wonder to meet, slouched in front of a pint of rum (or even more) Long John Silver, Henry Morgan, Blackbeard, Jack Sparrow or another of the unsavory characters that we are accustomed to imagine in a remote Caribbean island. Only this time it will be better not to stay away and instead …… PARTICIPATE.

THE NIGHT OF PIRATES starts after sunset until late at night.
The underlying theme of the event is a very special TREASURE HUNT where every participant is a team-crew of commercial businesses, who joined the organization.
In addition to the treasure hunt, an attraction of the evening events contour: the arrival and landing of crews of pirates on the shores of the harbor, the decorations and celebrations in the premises.
Each “inn” in fact organizes its own festival in which both participants are involved in the treasure hunt that regular patrons.
Depending on the type of exercise but strictly on the theme of “pirate”, each room will have complete freedom in the choice of the type of celebration and decoration.