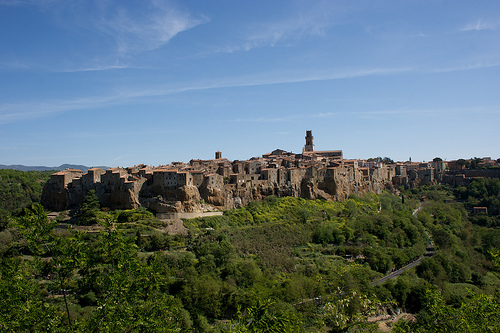 Nicknamed “Little Jerusalem”, Pitigliano is a Tuscan village that is located in the territories of the Archaeological.

The village of Pitigliano is only about 25 km from Terme di Saturnia, placing itself in the more interior of the Tuscan Maremma.

The country has been built on a tufa rock, which overlooks all of the valleys below and that gives him a look of mystery and magic, as if the town was actually suspended in the air, its origins are actually very old, how can testify to its monuments and its buildings.

The land on which now stands the village of Pitigliano was inhabited in ancient times by the Etruscans who here built their villages and efforts were made in the construction of cemeteries and inland quarries, today major attraction for those interested in history and archeology, legend has it that the country was founded by two young Romans, and Petilio Celiano.

– Orsini Palace, residence of the family of noble

– Monument to Spawn Ursinea, consisting of a block of marble, with inscriptions in Latin and the statue of a bear heraldic

– Orsini Park, with statues and monuments took the same count

– Church of Saints Peter and Paul, the main religious building in Pitigliano

– Church of San Rocco, the oldest of the town

– Sanctuary of the Madonna delle Grazie, built outside the country, gives a view of the Tuscan village