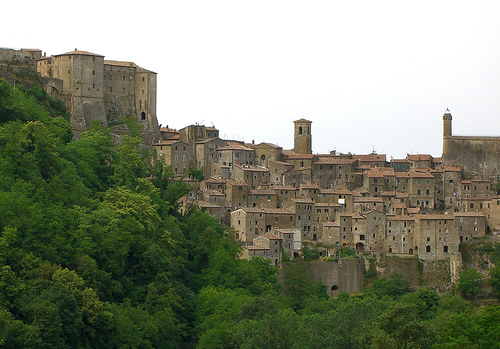 Located about 30 km from Saturnia, Sorano is situated on a tufa rock.

Built in medieval times, Sorano was born as a city under the control of Aldobrandeschis, then, starting from the second half of the thirteenth century the town became a dominion of the Counts Orsini, then move on to Siena, to the Medici family, and to be then including, from 1860, the Kingdom of Italy.

Walking through the streets of the old town you will see how the country present a distinctly medieval feature that is found easily in the home and in the most ancient monuments.

– Fortezza Orsini, the country’s main building was erected during the Middle Ages and has served as the residence of the Counts Orsini Aldobrandeschis first and then

– Collegiate Church of St. Nicholas, built in the Middle Ages and guardian of important paintings and frescoes, is classically

– Porta di Sopra, which lies in the upper part of the country and from where you can enjoy a panorama that sweeps over the countryside of the Maremma

– Comitale Palace, dating back to the Renaissance

– Boulder Leopold, defensive historic place of the Tuscan city, built during the Middle Ages, but it reached its current connotations only in the eighteenth century