Capalbio is a town of 4,306 inhabitants, is accessible from our hotel in about 40 minutes by car and the environmental context in which it is located and the art-historical importance assumed in the Renaissance, Capalbio was also nicknamed Little Athens. In addition, the municipality has been awarded the 5 sails and first place in the Blue Guide of Legambiente-Italian Touring Club, 2007 for the protection and wise management of its beaches, the landscape and the surrounding environment. 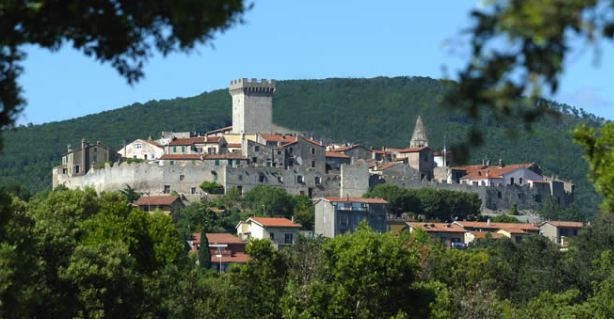 The Castle of Capalbio was part of the donation to the Abbey of Saints Vincent and Anastasius at Tre Fontane 805 by Charlemagne. 1161 is the privilege of Pope Alexander III, who confirmed that possession of the same abbey. A few years later are Aldobrandeschis to obtain the lands of Capalbio, that at the end of the thirteenth century, are captured from Orvieto.

Following Capalbio passed to the Republic of Siena, falling under the dominion of the Orsini. It is an economically prosperous period, during which they are carried out important works, and enriched with possession walls, houses, churches and completes the fortress, whose construction was initiated by Aldobrandeschis.

In April 1555 the Spanish troops of the Prince of Morignano, allied with the Medici, conquered Siena and June, after Porto Ercole and Orbetello, Capalbio also fell under the dominion of the Spaniards. Capalbio was awarded by Spain to Cosimo I de ‘Medici and by this time the country began an economic and demographic crisis.

The economic conditions undergo a standstill due to several factors including the unhealthiness of the marshland, the remoteness of the central power, the location on the borders of the state, the lack of an adequate road network and, finally, the incursions of the Turks. The unhealthy air, however, is one of the most serious problems facing the Maremma during the seventeenth century and in fact takes the depopulation due to malaria.

The Medici dynasty will maintain its sovereignty over the Grand Duchy of Tuscany until 1737, when he extinguished the main branch, the succession will pass to the Dukes of Lorraine. In the meantime, the State of Deans ceases to be a Spanish possession to pass under the rule of the Austrians (1707) and then of the Bourbons (1736).

Capalbio lost its administrative autonomy, since the aggregated Manciano Leopold I, Leopold II, and in 1842 it aggregated in Orbetello, a status that will last for 100 years. During this period, the disastrous social situation is also added the scourge of brigands who roamed the Maremma.

After the Second War of Independence Capalbio passes under the Kingdom of Italy and agriculture is still characterized by large landholdings. In 1952, with the implementation of agrarian reform, preceded by the creation in 1951 of The Maremma, there is a modern development of agriculture and in 1960 Capalbio gets its own administrative autonomy.

Tarot Garden, park-museum built between 1979 and 1996 on a knoll in the valley of Capalbio, between the towns of Garavicchio and Pescia Fiorentina, which rises just above the Maremma plain. The area contains a number of statues and sculptures depicting the tarot, created by Niki de Saint Phalle.

Capalbio Cinema International Short Film Festival, was inaugurated by Michelangelo Antonioni in 1994 and since then the festival promotes the film with an eye to the short film directed by Italian and international.
Capalbio Books event dedicated to the pleasure of reading, which takes place every year in August in Capalbio in the delightful setting of Piazza Magenta.