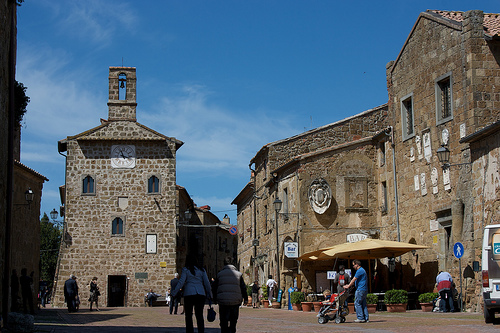 Included in the list of “Most Beautiful Villages of Italy” Sovana is one of the oldest towns of the Maremma and Tuscany in the south, is located about 25 km from the town of Saturnia.

The birth of the city of Sovana be traced back to Etruscan times, the center was originally known by the name of Suan, was a city of the Roman Empire who enjoyed both political and social significance of the presence of the Etruscan necropolis remain today, Sovana it houses one of the largest in Italy, and the inland quarries.

Among the monuments that are worth a visit we definitely need to mention:

– Praetorian Palace, now the Visitor Center of the Archaeological Park of Tufo, dates from the thirteenth century

– Loggia del Capitano, with the coat of arms of the family De ‘Medici

– Birthplace of Gregory VII or Hildebrand of Suan

– Palais Bourbon del Monte, which was built during the Renaissance

– Fortress; defensive building erected in the year one thousand

– Cathedral of Saints Peter and Paul, which overlooks the Piazza del Praetorian, it is a building dating from the eleventh century and guardian of artistic works of great importance, such as a baptismal font

– Church of St. Mamiliano historic religious building of the town, within which were brought to light a whopping 500 coins of the Roman Empire, dated the fifth century AD