The Natural Park of Maremma is one of the most interesting destinations in the province of Grosseto. Inside you will find some areas of the coast of the most beautiful and untouched areas of the Maremma coast. 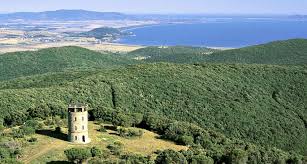 The main Visitor Center is located at Alberese. The aquarium of the lagoon of Orbetello based in Talamone has the function of Visitor Center for routes from Talamone and therefore easily accessible from our hotel located just a few kilometers from the village.

There are many itineraries, which are characterized by different levels of difficulty; It ranges from simple, some even for the handicapped to complex without ever reaching levels very challenging. There are numerous possible excursions, horseback riding, canoeing, night hikes and for the observation of birds.
Territory
The Park covers an area of ​​9800 acres and stretches along the coast from the village of Principina a Mare (town of Grosseto), until the country diTalamone (town of Orbetello).
In its territory last fall wetlands near the mouth dell’Ombrone, which are rich in wild life and yet, host large colonies of wading birds.

Further south, the area is composed of mountains dell’Uccellina covered by a thick Mediterranean and east, at the foot of the mountains, vast grasslands, where lies the Farm Spergolaia company’s regional administrative center and home of the cowboys.
The type of environment prevailing in the SIR “Plains of Maremma” is given by secondary grasslands and abandoned agricultural areas, mostly used as pasture for livestock semi, wetlands, freshwater or slightly brackish water, arable land.

Vast areas of the site are flooded for part of the year. Among other environmental types are the relevant section of the river near the mouth, the Mediterranean, the rows and the trees, small groups of pine. This part of Tuscany is an example of relict marsh complex, high-value natural and scenic, used for productive purposes (grazing activities semi, with cows and horses Maremma).

The SIR “dell’Uccellina Dune” is one of the increasingly rare significant stretches of sandy coastline, with limited human activity and dynamism with vegetation not affected by tourism. The type is given by the prevailing environmental dune systems without bathing facilities therefore of great importance for the preservation of the species that is psammophilous psammoalofile. The site is also important for the preservation of a unique endemic zone: Limonium etruscum. The presence of important Burhinus oedicnemus. Sandy coast, mostly in the regression, with dune ridges and depressions behind the dunes, characterized by typical plant formations of too humid environments, generally in excellent condition.

In the Maremma Natural Park there are also many archaeological sites, some Etruscan-Roman, others dating back to the medieval period, such as towers and the Abbey of Saint Rabanus dating back to 1100 and recently restored.
Cala di Forno, located inside the Natural Park of Maremma, is a picturesque beach of fine golden sand, which tends to become white under the powerful rays of the sun of spring and summer. You walk through the park A4 route from Alberese.