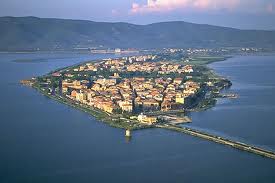 Orbetello at the center of the lagoon is only twenty minutes from our hotel. The lagoon is bounded towards the sea from the bolster, the bolster Fenigliae Giannella. The Bolster Fenglia is a protected nature reserve where access is free in walking and cycling, and is facilitated by a lorry road that runs through the reserve along its entire length of about 6 km. Along the way there are, at intervals of about 1 km, milestones and information panels.

The History of the City

Orbetello, about 35 km south-east of Grosseto, it was built in the middle of the lagoon in the place where it already existed in Etruscan village. In 280 B.C. came under the control of the Romans, who at the same time founded the colony of Cosa, in the vicinity of Ansedonia. The city went through the Middle Ages without leaving a trace of events worthy of note, mentioned in documents as Orbetellum and Orbitellus, which probably comes from the diminutive of the Latin herbetum (“grassy place”).
In medieval times it became a possession of the family Aldobrandeschis who checked up at the beginning of the fourteenth century, when the center came under the control of Orvieto and was probably rebuilt around 1110 by Pietro Farnese. Following various struggles for control of the town between the Orsini of Pitigliano and Orvieto, the town was conquered in the fifteenth century by the Sienese that checked until the middle of the next century, when the entire area came under the rule of Presidii, the Orbetello which became the capital. The lagoon town became part of the Grand Duchy of Tuscany, only the early nineteenth century, following the post-Napoleonic Restoration.
From the lagoon of Orbetello, between 1927 and 1933, Italo Balbo left for his four cruises flying a squadron of seaplanes.

The festival of the Cruise, which takes place between the last week of July and first of August.
During the summer, on the whole municipal area (Talamone Fonteblanda and Albinia) there are different festivals.
Every year during the celebrations of May, in the waters of the Lagoon of Orbetello is the traditional race for small boats, whose first edition dates back to 1768. A challenge in the rowing competition are the 5 districts of the country (the three historic Piazza d ‘Arms, and Porto Cathedral and the “new” and Neghelli Station, which joined with the urban development after World War II).

What ancient Roman city located on the promontory of Ansedonia, was founded in the third century BC, the city became of paramount importance to become the political and administrative capital of the territory. With the fall of the Roman Empire and the beginning of the barbarian invasions, the place began a slow but inexorable decline, before becoming a reference point for the Saracens and later a refuge for bandits all this led to demolish the Sienese in the first half the fourteenth century. The city is surrounded by a wall that was reinforced by numerous polygonal towers and some spurs: access to the city was made possible thanks to some ports of which Porta Romana is one that is known to us in the best conditions. At the top you can see the Capitol, the temple with three cells joined by two other temples side probably dating to the second century BC From Capitolium begins a road that leads to the area of ​​the hole where you recognize several buildings including the basilica, the baths and the other two temples. The area is, however, remained for a long time semi-abandoned and most of the archaeological finds was looted by grave robbers in the first decades after World War II; many ornaments and architectural details are finished to the numerous villas adorned the place and near Argentario. Temple Talamonaccio ancient Etruscan religious building, the ruins of which are still located on Poggio Talamonaccio.