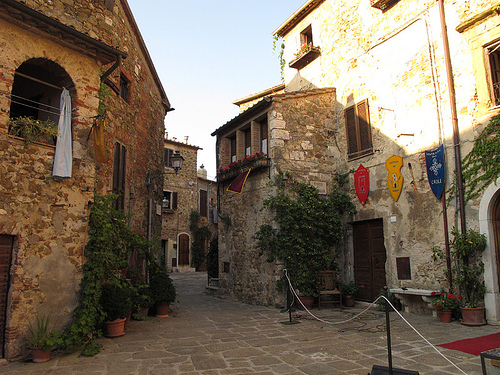 Quaint village of Tuscany, Montemerano is a valuable testimony to the medieval era, as told by his oldest houses and its historic monuments.

Montemerano is located just a few minutes away from the Terme di Saturnia, just a five minute drive away.

From his village you can enjoy the view of landscapes and natural landscapes of value and environmental value, you will be able to admire the hills of Maremma, the cultivated fields, or woods and valleys, immersing himself in full in the spirit of southern Tuscany.

The town was built around 1200, under the control of the family Aldobrandeschis, then became a possession of the family of the Basque city of Orvieto, before passing under the power of the Republic of Siena, then belonged to the Grand Duchy of Tuscany, with family Florentine De ‘Medici and, in the second half of the nineteenth century it became part of the Kingdom of Italy.

The country preserves architectural examples of medieval art in homes already the most common, although there are buildings and monuments worthy of mention:

– Church of St. George, which was built in the Middle Ages and restored and enlarged in the fifteenth century

– Tower of San Lorenzo, once flanked from the church exists today as a private residence

– Towers, which once were used as lookout and the Rock

– Church of Our Lady of Cavalluzzo, just outside the village, nestled in the heart of the Maremma countryside, dating back to the fifteenth century